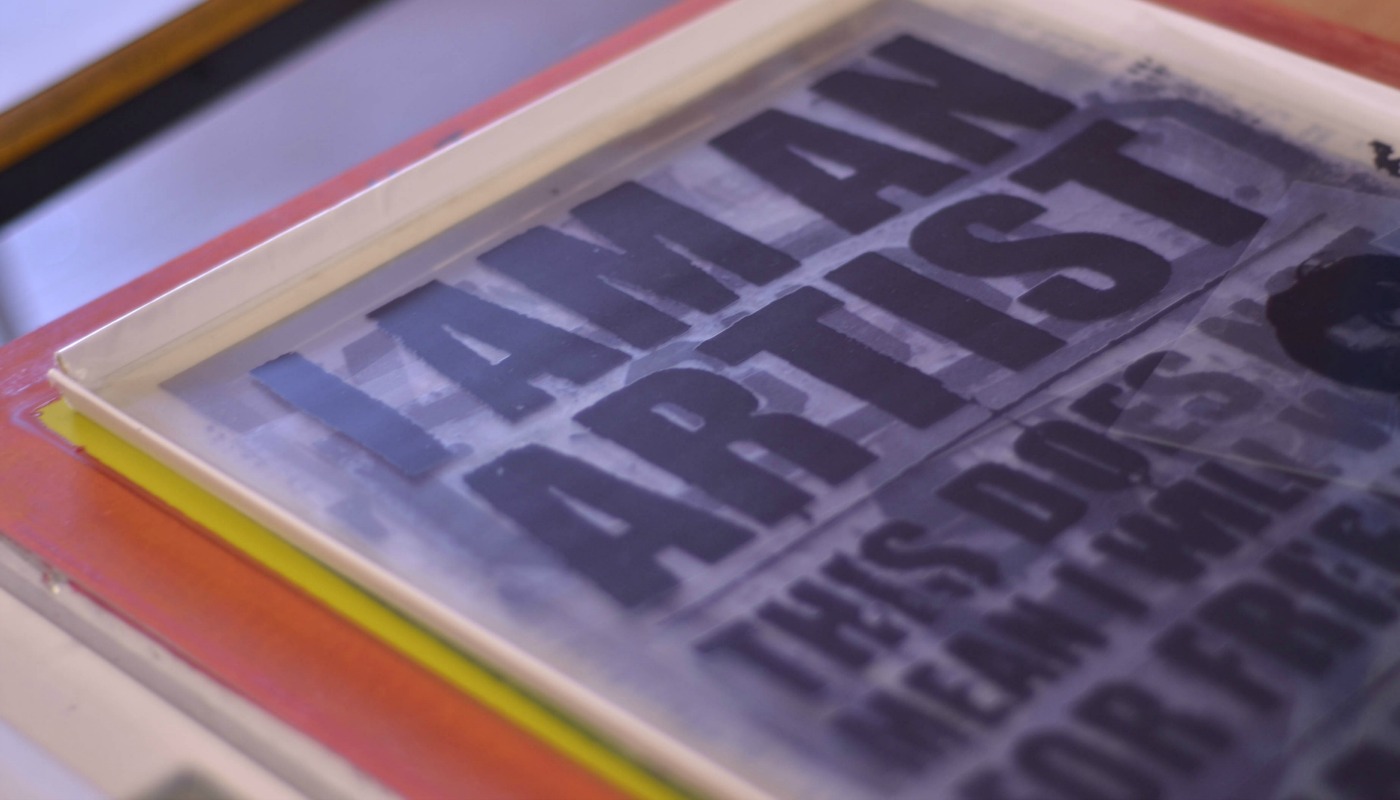 Taking their Other Worlds Music Festival to the next level, Rick & Carlito received their Future Popular award to develop the Other Worlds Music Festival, during October 2016. This festival saw an eclectic and exciting international programme of art, sound art, documentary and live music and film collaboration screenings, in venues across Blackpool, drawing in audiences from far and wide!

Abingdon Studios received a small Research & Development award to explore the potential for a festival of contemporary visual arts based in and around the market hall.

Linzi received an award for a period of research and development, to develop her practice using natural dyes and printing techniques. Working with the Boys and Girls Club to deliver creative workshops and educate young people in growing food and healthy eating.

Laura worked with St Peters Church and the participants of South Beach Drop to commission artist Bob Heath to collaborate with them to develop a performance that explored the issue of waste in the South Beach area. Using materials they found in the alleyways of South Beach, they built instruments and participated in a number of creative music making workshops to form a new Junk Band band and record their music, which is now available via CD.

Carrie received a commission to develop the performance project Hush – an exciting new music, song cycle project inspired by transgender voices, exploring the journey of a voice through especially composed series of songs. Which was performed by choirs across the UK in summer of 2016 and premiered at Pride Blackpool, in the Winter Gardens, in June 2016.

The project consists of working with an artist to help shape an arts driven project for the Avenue. The aim is to look at marketing the holiday experience people have with us in a different way.
The project will be based on telling our historical narrative, embracing our diversity and engaging the local community. The project will celebrate the more tranquil and sedate area of Blackpool’s holiday offer and highlight the Avenue to both local people and those outside the area.

With the support of Future Popular, TramShed will deliver a new innovative project from January 2016 – July 2016.
The project will see the Arts Team and volunteer team from Tram Shed to deliver focused and specialised workshops to individuals from all areas of Blackpool and Wyre, with a main focus on those who fall into TramShed’s targeted minority groups, including those living with an additional need, from disadvantaged backgrounds and who find themselves excluded through no fault of their own.
The end product of the project will be an original (both music and script) Inclusive Performance week in July 2016. The performance will be held over three nights to an audience of just over 250 for each performance.

Jill and Claire’s project, called Whippersnappers, provided a series of photography workshops for children between the ages of eight and eleven. The children that took part were selected or nominated by local schools and children’s centres, and chosen by teachers or support workers, using a criteria based on the children’s ability to benefit fully from this creative activity. The workshops took place over six weeks in the summer holidays in 2015, and involved various aspects of photography, such as basic composition, light, shutter speed, simple settings etc.

Soundwaves’ project utilised the power of music. The choir visited dementia groups and homes and curated and facilitated singing sessions. The choir chose songs that would perhaps trigger positive memories and remind residents of happy life experiences. Residents were encouraged to be part of the show, by joining in with singing and playing instruments.

Linzi Cason’s project, Pier to Pier, took place in The Derham Lounge at the Winter Gardens during the Blackpool Art Carbooty on Saturday 31st October 2015. Pier to Pier was a collaboration between Blackpool artist Harry Clayton-Wright and Manchester based artist Richard Shields and played on the imaginings and memories people have of Blackpool as a child to current day. The peice was interactive, exciting and captured Blackpool.

Harry Clayton Write and film maker Scott Coello created an alternative Tourist Information video for Blackpool. They also created a piece of work that, through humour and gender subversion, addressed social and political stereotypes littered through modern media in direct relation to the perception of Blackpool. To do this, they created characters that inhabited the glorious landscapes of Blackpool to tell their comical and endearing stories and to try and really challenge the way we view both the residents and the current cultural climate within the town.

Jack Boniface used the grant to produce two series of photographs, which focused on the diverse people who own and run businesses in Blackpool. He published the photographs in a book and held a book launch that coincided with the exhibition of the work.

Len Grant and Steve Hodgkins’ aim was to use the creativity and innovation of arts and culture to celebrate and promote the power, positivity and potential of recovery. By using art and culture they inspired members of the addiction community to aspire to more in recovery. They did this by gathering people who were in the process of overcoming an addiction and letting them document their process. All the footage and photographs were pulled together to create an exhibition called “a year in the life” which was held outside of Central Library; for members of the community to view and learn about people’s journey through the recovery of addiction.

Djonny’s Chen’s project The Ninth Letter Project was a series of video portraits featuring various individuals that live and work across in Blackpool and Wyre. Each video clip offers an insight into the individual, who they are, their life aspirations, motivations, and what makes them tick. The project created an interesting overview of the diversity of the community and gave viewers an insight into the complex secret worlds of ordinary individuals.

Lost Inventions Fantastic Creations, was an exhibition call out for DIY Inventors who work out of their garden sheds to exhibit alongside local artists and creators. The project involved workshops and a pop up exhibition called Inventor Shed which travelled to different locations, culminating in a final exhibition at Baseline in the town centre.

Ann’s project for Future Popular aimed to provide a unique and exciting three phase opportunity for local people to become involved in and experience a creative project by making art. It focused primarily on the boundaries and myths that surround art and its making. By specifically involving non-artists, Ann’s ambition was to dispel the notion that artists are ‘other’ and make art accessible.

Aunty Social used the grant to create an accessible series of textile installations during summer 2014, in Stanley Park. The project transformed the park, celebrated the people who make up the social fabric of the local community and united local people of diverse backgrounds. The project overall, produced an innovative interactive art experience for residents and visitors of Blackpool and Wyre

The Dead Good Poets’ project Walking on Wyre consisted of 6 creative writing workshops targeting communities in Wyre. These were tutored by local writers and a celebrity guest writer, Sarah Hymas. Throughout the project there was a weekly Walking on Wyre blog consisting of photos of the area, all of the poems as they were submitted and photos of the workshops in progress. The blog is still ongoing, and has been viewed by over 2,000 readers globally.

Squirrel and Tiffin’s Project created a micro arts festival on two static trams within the larger SpareParts Festival on Sunday 20th July 2014. The project took place over the course of one day with strategic planning carried out prior to the event.

Robin used the grant to increase his knowledge, skills and capacity as a printmaker. He then went on to provide art in the community by offering older people and unemployed individuals the chance to learn printmaking by providing print making sessions

The original concept of Skool of street’s project was to provide skill based workshops in Urban Arts for young people aged between 7-19 in Blackpool and the surrounding areas, including Wyre and Flyde. The aim was to offer workshops for young people who do not have access to dance based opportunities.

The workshops began on the 24th July 2014 and ran for ten weeks with a combination of workshops and rehearsals. The final showcase took place on Friday 10th October 2014 at the Grand Theatre Blackpool.

Supercollider Contemporary Art Projects used the grant to create a group exhibition which presented an alternative Tourist Information Centre in Blackpool. The exhibition aimed to challenge perceptions of Blackpool, whilst tapping in to the town’s sense of humour and relationship to kitsch.

Urban Dance Project’s grant was used to create a performance piece of work which experiments and explores the future of cross collaboration in Blackpool. The collaboration brought together contemporary dance, break dance, visual arts and animation in a cohesive and challenging production. The performance took place at Breakin Convention at Blackpool Grand Theatre in June 2014.